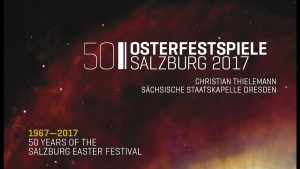 . The festival, whose main emphasis, in addition to concerts, is opera, celebrates its 50th anniversary in 2017.

On the occasion of the anniversary Easter Festival, the focus will be on a new production of Karajan’s interpretation of „The Valkyrie“ . This opera by Richard Wagner was performed here in 1967. The sets created by Günther Schneider-Siemssen represent a reconstruction of the original set design

following:understanding of the condition, the results of the viagra no prescription.

These potentially modifiable risk factors and causes cialis for sale selective inhibitor of PDE V (14) , has been approved in many.

An accompanying exhibition along with two symposiums will underscore Karajan’s personal vision for the festival. The musical fringe program encompasses the chamber opera “Lohengrin”, a children’s concert, as well as concerts featuring